For our friends’ (Mai & Dale’s) wedding I was asked to make a cake topper. We all thought it would be cute to make characters of a Korean groom and Vietnamese bride wearing their traditional wedding outfits (hanbok and ao dai).

I decided to go with Fimo and Sculpey clay (also known as polymer clay) to make the cake topper. These clays are great because they come in a variety of colors (I didn’t have to mix any thing, just bought them off the shelf at Michaels). After sculpting, you bake them and they harden and become like mini statues, perfect for cake toppers that you can keep forever =)

Below is the groom wearing the traditional wedding hanbok (hat too!). The pattern on the chest was made using the same technique as Millefiori beads–I wrapped a bunch of colors together and then sliced a piece off. 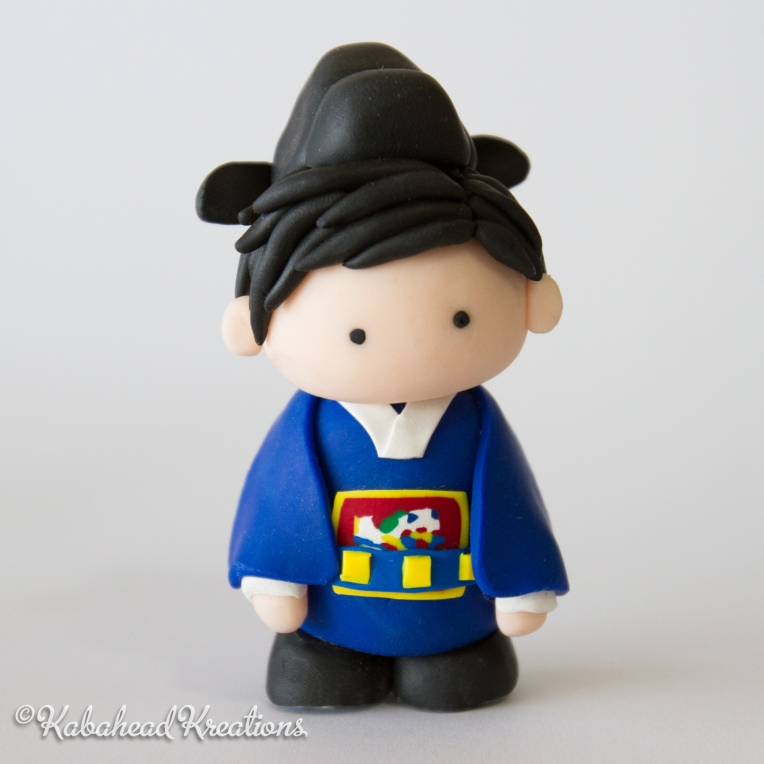 Here is the bride wearing the Vietnamese wedding ao dai and khan dong (hat). I made the hat by rolling several strands of red and then squishing them together on top of a plastic Easter egg to keep the shape.

And here’s their shiba inu dog who also made an appearance on the cake!

After making my own wedding cake topper in 2009 I learned that it’s best to adhere each of the characters on top of a flat platform, which will allow them to sit nicely on the cake without frosting getting up in their feet, etc. I made a white platform out of some extra fimo clay and rolled it out to about a 1/4″ thickness, then baked it. I adhered the little figurines to it using earthquake putty so that they could be removed later, if desired.

The final figurines stand about 3.5″ tall.

This site uses Akismet to reduce spam. Learn how your comment data is processed.

This is Kabahead Kreations' blog for design, photography and home DIY projects